In the Darkness by Karin Fossum 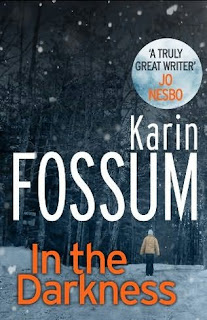 In the Darkness is one of 10 books this prolific Norwegian queen of crime, Karin Fossum, has written featuring the reticent Inspector Seijer. This first book in the series, which came out in Norway in 1995, has only now been translated into English, even though the other nine titles have already been published here.

I am a great fan of Fossum. Her plots keep you in as much suspense as, say Jo Nesbo, but she sheds much less blood on the pages. With a lesser body count, the writing has to perform better, and this is indeed where Karin Fossum excels. Her characters, often ordinary people faced with and doing extraordinary things, are well drawn. Fossum relies heavily on physiology rather than caricatures and manages to get away from the traditional plot of a head scratching policeman, who of his own back goes in search of a killer, only to find another victim, and so it goes on, until the said ridiculously (stupidly) brave detective finds himself face to face with the killer, and wins the day.

In this first book in the Seijer series, the complicated central character is Eva, an ambitious artist and single mother to Emma, an overweight six-year-old. Struggling with money, Eva meets an old friend who offers her a way out of poverty. But as you may have guessed, there is no such thing as easy money.

The novel is set in a small industrial Norwegian town, which is 'only beautiful after dark', with a fast running river being its only redeeming feature. Both the river and the mountains framing the town feature heavily in the plot. The feel of the book is contemporary, but the lack of mobile phones, or GPS technology, makes the plot seem a little unconvincing. This was most marked in the beginning of the book where, when she finds a body floating in the river, Eva makes a call to the police from a public phone booth. Had I known the book was in fact written in the early 1990's, I would have probably enjoyed it more. Instead I kept thinking, why is communicating so difficult for these people?

But on the whole I definitely enjoyed In the Darkness. It has a good, fast plot, with an excellent twist in the end, which I sort of guessed, but had forgotten about while I worried for the heroine. Plus all the people in the novel were very convincing. Nobody is wholly bad, or wholly good.

The beauty of having enjoyed this book is that there are nine more to read straight away. Hurrah!

In The Darkness by Karin Fossum is published by Harvill Secker
Posted by Unknown at 13:35

Here are links to my novels